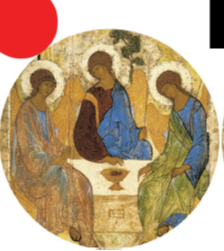 Today's gospel begins with 'some Greeks' approaching Philip (possibly because of his Greek name) with a question, "Sir, we wish to see Jesus." Philip goes to his brother, Andrew, first and together they went to Jesus. It is a curious detail that is worth reflecting - why was it put in? We don't know if the Greeks ever did meet Jesus, but it seems to be a signal to him that another milestone had been reached ... because he declares to Philip and Andrew, 'The hour has come for the Son of Man to be glorified.' This reminded me of the quote attributed to the
second century saint, St. lrenaeus of Lyons (I paraphrase) 'the glory of God is a human being
t fully alive'.

To see Jesus, means being with Jesus. Jesus says 'And I, when I am lifted up from the earth, will draw all people to myself.' John links the statement to the crucifixion but I want to expand it to include not just being raised up on the cross; but also being raised up from death and being raised up to be with God (the ascension), enriching the Godhead with this human life fully lived (complete with the marks of crucifixion). Jesus' 'risings' are good news for all people, making it possible for us to be raised into the life of God now and into eternity.

Jesus' soul was troubled - there was anguish and pain but he persisted and was glorified as a result. Thank you, Jesus!

May 22
Sixth Sunday of Easter