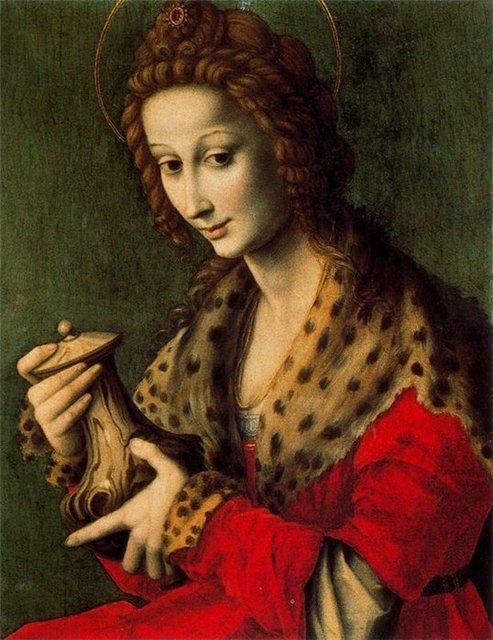 To shape my reflection this week, I wanted to do so using Mary Magdalene, who we commemorated this week.

There are a lot of Mary’s to contend with in the Bible and often this Mary gets confused with others – so, Mary Magdalene is not now considered to be Martha and Lazarus’ sister nor the woman who anointed Jesus’ feet.

However, from the Bible, we read that Jesus healed her of seven demons, and she helped fund his ministry (Luke 8:2, 3) - as an aside, it’s interesting the only named people in connection with money are all women.  She is also named as being present at the Crucifixion and at the burial of Jesus (Matt 27:55-61).

I want to pause here and reflect on Mary’s faithfulness – she is present when others have fled and hid; she is present when all seems lost and has come to an end…..and even at that end, Jesus’ crucifixion and burial, she is present…and we will see in a moment, that her care for her Lord extended to wanting to dress his body in burial.

This is remarkable – her consistency despite all the challenges and the fact that all this is recorded in our scriptures.  I believe they have been written for our benefit.  Yet, what we know of Mary Magdalene tends to be none of this but various theories which are more salacious and not factually correct.  We have accepted unquestioningly what has been said about her, or rather not said. I have this nagging suspicion that Mary Magdalene was ‘smeared’ so that her story would be pushed to the margins, along with other women, as men increasingly asserted their leadership of the church.

Early on the first day of the week, while it was still dark, Mary Magdalene came to the tomb and saw that the stone had been removed from the tomb. 2 So she ran and went to Simon Peter and the other disciple, the one whom Jesus loved, and said to them, ‘They have taken the Lord out of the tomb, and we do not know where they have laid him.’ 3 Then Peter and the other disciple set out and went towards the tomb. 4 The two were running together, but the other disciple outran Peter and reached the tomb first. 5 He bent down to look in and saw the linen wrappings lying there, but he did not go in. 6 Then Simon Peter came, following him, and went into the tomb. He saw the linen wrappings lying there, 7 and the cloth that had been on Jesus’ head, not lying with the linen wrappings but rolled up in a place by itself. 8 Then the other disciple, who reached the tomb first, also went in, and he saw and believed; 9 for as yet they did not understand the scripture, that he must rise from the dead. 10 Then the disciples returned to their homes. 11

But Mary stood weeping outside the tomb. As she wept, she bent over to look into the tomb; 12 and she saw two angels in white, sitting where the body of Jesus had been lying, one at the head and the other at the feet. 13 They said to her, ‘Woman, why are you weeping?’ She said to them, ‘They have taken away my Lord, and I do not know where they have laid him.’ 14 When she had said this, she turned round and saw Jesus standing there, but she did not know that it was Jesus. 15 Jesus said to her, ‘Woman, why are you weeping? For whom are you looking?’ Supposing him to be the gardener, she said to him, ‘Sir, if you have carried him away, tell me where you have laid him, and I will take him away.’ 16 Jesus said to her, ‘Mary!’ She turned and said to him in Hebrew, ‘Rabbouni!’ (which means Teacher). 17 Jesus said to her, ‘Do not hold on to me, because I have not yet ascended to the Father. But go to my brothers and say to them, “I am ascending to my Father and your Father, to my God and your God.”’ 18 Mary Magdalene went and announced to the disciples, ‘I have seen the Lord’; and she told them that he had said these things to her.

Jesus entrusts the foundational gospel message – that he is raised from the dead and is returning to his Father and our Father, to Mary.  He does not say, ‘Mary, could you pop over to wherever the men are hiding and bring them here as I have a really important message to give them’ – he gives the message to them through Mary.  As various parts of the worldwide church say, Mary was the ‘Apostle to the Apostles’.  Her faithfulness is rewarded.  Yet, over the course of history her position, certainly in the western church, has been relegated.  Why?

I have seen Christian story books for children which go straight from the crucifixion to the empty tomb as discovered by the men – no mention of the women at all.  They were airbrushed out of the narrative.  As you probably realise, in any field of human activity, history is told by the victors.  If we only tell partial stories, very quickly our histories become misshapen and we view the world, the bible and our history through the cultural spectacles given to us, even if they are wrong.  I was brought up in a tradition where our stories demonised other Christians – I was trained as a child to filter the people I encountered to work out if they were from my tribe or not…..and if not, to have nothing to do with them.  As a child I unquestioningly accepted these things as right, now, I believe them to be wrong.

Similarly, the indigenous peoples in these lands, since the Settlors arrived, have struggled to have their voice and traditions remembered. We talk about Canada being a young country and only 153 years old – that’s a settlor mindset and narrative, when it is celebrating the 153rd anniversary of the Constitution Act of 1867, which established Canada as a country.  The indigenous peoples’ lives and stories go back countless centuries before that, but that is forgotten, as is what has happened to them since.

Returning to the Bible, let us turn to what is probably the Apostle Paul’s most important letter (certainly the most comprehensive) – his letter to the various house churches in Rome.  In Romans 16, we discover that the person taking this letter was a woman called Phoebe, a deacon in the church in Cenchrea, in Eastern Corinth. She’s probably a businesswoman, on her way to Rome.  The bearer of the letter would probably have been quizzed as to what Paul meant by various parts of his letter.  For this reason, NT Wright, the Anglican bishop and theologian, has frequently said that probably the first person to give an exposition of Paul’s letter to the Romans was Phoebe.

So, what is the application today?  The first thing is that we may need to test our assumptions about what we think scripture says, in both the Old and New Testaments. Is it because we have been told that is what it says – might that be a problem?  The Old Testament cannot be dismissed because it is full of blood and gore (very little of it is, though definitely there).  The Hebrew Scriptures were also unusually positive about woman.

More generally, we need to become aware of the cultural lenses through which we view the Christian life, the Christian church and the world and whether they needed to be traded for a new pair.  What are our blind spots?  Who’s stories and experiences are not being heard?  Is this not why the Black Lives Matters is so important?  They have felt their lives do not matter because of systems and structures that keep them marginalised and the visible symbols of that – the statues of Confederate heroes, flags, names have been in place until now.

I will finish my quoting from Ephesians. It feels like many people who oppose the theology of liberation, do so by saying it is taking us away from the authority of scripture.  I would argue the very opposite – it is the fact the ‘victors’, those in charge, misshaped the narratives we were taught to perpetuate the status quo when the scriptures point to something radically different.  We need each other in order to fully reflect God and to learn and grow.  Let’s be a people who look to see if there is any way in us which limits us to see as God sees and denies fellow members of the body – let’s build a bigger table for all as Jesus did.

Ephesians 4:14-16 14 We must no longer be children, tossed to and fro and blown about by every wind of doctrine, by people’s trickery, by their craftiness in deceitful scheming. 15 But speaking the truth in love, we must grow up in every way into him who is the head, into Christ, 16 from whom the whole body, joined and knitted together by every ligament with which it is equipped, as each part is working properly, promotes the body’s growth in building itself up in love.