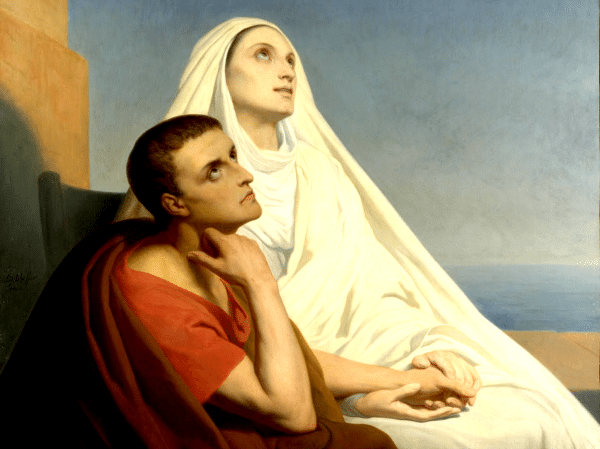 Dear friends, this week’s reflection will be quite short, and I hope you will be ok with that. Next week, the church will remember Monnica (August 27) and the next day, her son, Augustine of Hippo (August 28).  I wonder what images are conjured for these two – I suspect they may be white when actually both were born in North Africa.  They serve as a useful reminder that the church was in Africa as early or even before it went very far into Europe.[1]

Both these characters (for that they were!), had enormous strengths and, well, traits that were….challenging!  Monnica brought her children up as Christians, though her husband was pagan (converting later) but Augustine was to reject the faith of his mother.  He had a colourful life during this period.  Monnica’s response was to pray fervently, plead with her son and corralled others to argue intellectually with him (often wearing bishops and others down in the process).

I simply want to reflect on the transforming work of God on Monnica and Augustine.  How they were not defined by their past but rather those past experiences became instruments of redemptive love – Augustine was known as an effective pastor, as well as for his intellectual output and spirituality.

Monnica’s own story included a ‘fondness of wine’ in her early years  and she had fierce ambitions for Augustine who was clearly an extraordinary intellect, a brilliant thinker, debater and leader (including a local gang of youths, for example!).  She did not hold back from interfering in her son’s life, including in the affairs of the heart.  For example, Augustine was in an unmarried long-term relationship with a woman and they had a son and somehow, both were sent away and a socially advantageous marriage arranged instead.  However, Monnica also grew in spiritual maturity through her life of prayer and that transformed those ambitions over time into a desire for his conversion to Christianity.

Augustine did not always appreciate his Mother’s interference and was embarrassed by her - he gave her the slip for a few years when he left North Africa for Italy, the seat of the Roman Empire.  Undaunted, Monnica discovered where he was and appeared on his doorstep!  However, Monnica’s prayers for Augustine’s conversion took place in Milan.  There Augustine met the Bishop Ambrose, from whom he learned that Christianity could be intellectually respectable, and under his teaching he converted and was baptised on Easter Eve in 387.  Augustine returned to North Africa, becoming a priest and Bishop.  While he has many critics as well as fans, Augustine was undoubtedly the towering figure in Christian thought, standing as the last patristic and the first medieval ‘father’ of Western Christianity.

I personally believe that we are at a significant point of change in history when it comes to Christianity and faith, comparable to when it became the official religion of the empire and the introduction of the printing press and printing in the common language of the people.   Saint Augustine straddled one of these moments in history and tried to interpret the Christian tradition from the one context to the next.

It seems to me that we need to be interpreters of the Christian faith to a world that is not familiar with it and also the other way around – we need to be informed by the culture around us.  While the message of the Gospel is unchanging, how that is mediated and explained does – we need to be alive to that.

Finally, we are reminded in this account that Africa was formative in the development of Christianity, including Western Christianity. That each of us has a role to play in passing the faith down from one generation to the next and that we are not held back by our past mistakes or traits – that if we make ourselves available to God, amazing things can happen!

Breathe in me, O Holy Spirit,

That my thoughts may all be holy.

Act in me, O Holy Spirit,

That my work, too, may be holy.

That I love but what is holy.

To defend all that is holy.

Guard me, then, O Holy Spirit,

That I always may be holy.

You have made us, O God, for yourself,

The Collects (Special Prayers) for their respective days this week:

Faithful God, who strengthened Monica, the mother of Augustine, with wisdom, and through her patient endurance encouraged him to seek after you: give us the will to persist in prayer that those who stray from you may be brought to faith in your Son Jesus Christ our Lord, who is alive and reigns with you, in the unity of the Holy Spirit, one God, now and for ever.

Merciful Lord, who turned Augustine from his sins to be a faithful bishop and teacher: grant that we may follow him in penitence and discipline till our restless hearts find their rest in you; through Jesus Christ your Son our Lord, who is alive and reigns with you, in the unity of the Holy Spirit, one God, now and for ever.