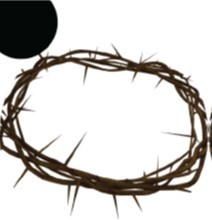 I want to consider the crown of thorns. The Roman soldiers. wanting to humiliate Jesus, dressed him with a soldier's purple cloak as a 'royal robe' and a crown woven out of thorns (hard to find in the centre of the city).

The long sharp thorns of Jesus' crown contrast with the laurel leaves of the Roman emperor. In Jesus' encounter with Pilate, a vision of two kingdoms (crowns) is offered, one of power and violence and one of self-giving love. However, I think there is deeper meaning and significance in the thorns. The beginning of John's gospel places Jesus at the very start of creation:

The good creation suffered because of humanity's sin against God, resulting in thorns (Genesis 3:18). From then on, thorns were seen as the absence of blessing. I suggest the crown of thorns gives expression to this - Jesus is crowned with the curse on creation as well as the shame of crucifixion between two criminals on his left and on his right (places of honour).

Jesus takes all of this onto himself so when he cries, 'It is finished (accomplished)' it really is and we can live in the hope of that life-giving message in the midst of death. But that is for Easter, for now, we simply try and take all this in.